Skip to content
Get short URL
U.S. President Donald Trump delivers remarks on honesty and transparency in healthcare prices inside the Roosevelt Room at the White House in Washington, U.S., November 15, 2019. © REUTERS/Tom Brenner
Follow RT on

President Donald Trump has not undergone any serious medical procedure during his recent check-up, nor was he “evaluated” for any major issue, his physician has said, as the White House seeks to dispel rumors of a surgery.

Attempting to shut down all speculation about the unusual visit.#breaking @WUSA9 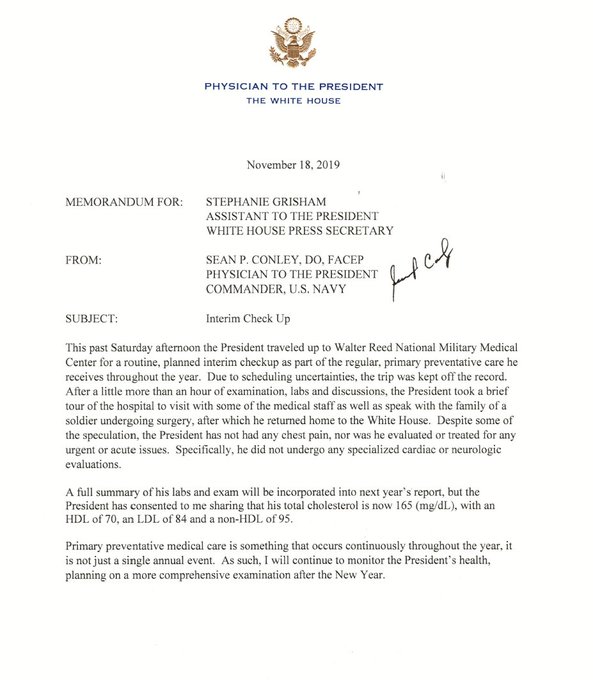 Since the visit was unscheduled, speculation has been rife as to what Trump was actually doing inside the facility, setting off various conspiracy theories on Twitter, with netizens noting that this year’s exam came several months earlier than usual. The visit has been widely described as “mysterious,” and some mainstream media outlets went as far as to report that Trump “was rushed to the hospital.”

While Trump himself attempted to set the record straight, tweeting on Sunday that he “began phase one” of his yearly physical exam, that only fueled speculation. White House press secretary Stephanie Grisham then clarified that Trump not only took advantage of “a free weekend” to do some lab tests and a physical, but also met a family of a special forces soldier who was injured in Afghanistan, as well as encountered some staff to express his gratitude for caring after wounded military personnel.

In a statement, Conley said that the trip “was kept off the record” due to “scheduling uncertainties.”

Despite some of the speculation, the President has not had any chest pain, nor was he evaluated or treated for any urgent or acute issues. Specifically, he did not undergo any specialized cardiac or neurological evaluations.

Conley said that the “full summary” of Trump’s check-up results would be included into the next year’s report. He, however, added that Trump granted him permission to disclose his cholesterol level which is down at 165.

ALSO ON RT.COMTwitter pokes fun at Trump after ‘lying’ medical records show he’s taller than ObamaAnti-Trump resistance crowd, however, pounced on the number, finding conspiracies everywhere and claiming such a low figure could not be real.