The death of the White Helmets co-founder, British mercenary James Le Mesurier, instantly led to suggestions of Russian involvement from the BBC. They deleted the rumours from Twitter too late, the fire of conspiracy was aflame.

The war in Syria has claimed an estimated 400,000 victims since it began and now British military contractor James Le Mesurier, could join their ranks after his death in Istanbul last night. Or maybe not.

The key supporter of the White Helmets, a group of first-responders who have been operating in the middle of the Syrian war, reportedly fell from his apartment balcony and died. The circumstances of his death are not yet clear.

But that was enough to set off the conspiracy theorists who believe every unexplained death in the world is somehow connected back to shady Russian organisations working alone or alongside the state.

That is how we end up with the BBC Diplomatic Editor Mark Urban suggesting that the dead man, widely reported online (degree of likely accuracy 50-50) to have been a former MI6 agent, may have been murdered, a comment Urban based on the spurious grounds that “a former colleague told” him.

In balance, he further stated that, “another well-placed source disagrees.”

Still puzzled why @MarkUrban01 deleted his Tweets suggesting death of #WhiteHelmets founder, James Le Mesurier, might be related to “Russian black propaganda”. Was he told to delete by MI6? 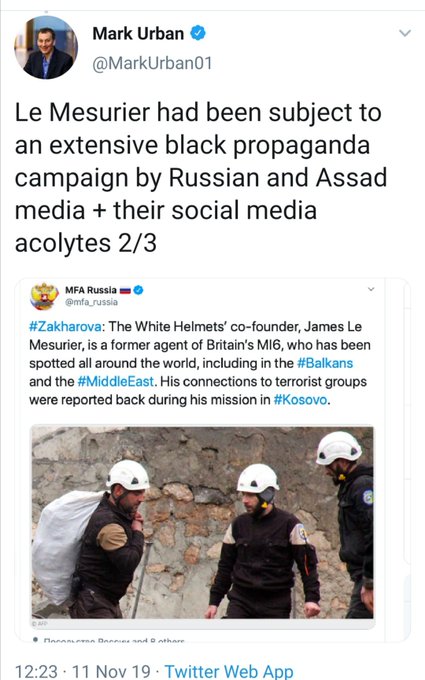 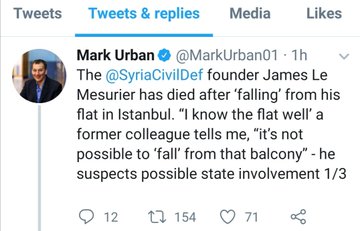 112 people are talking about this

What sort of intelligent, reliable, fact-based journalism is this? This the BBC! It seems these unsubstantiated comments from Urban were considered too much even for the BBC and the thread was removed from Twitter, but not before it had been retweeted nearly 400 times, giving it legs and a life that have already done the job of emulating fake news.

Now, perhaps unwittingly, the BBC has poisoned the well for any future investigation. The existence of unnamed sources, the former colleagues who will never be named or found, the taint of something very wrong have just decimated any hopes of an objective inquiry into what actually happened.

Because when such a senior journalist even suggests the whiff of scandal or intrigue around an incident like this, it is like a match to the touch-paper for social media nutters.

No more evidence needed. This, the Twitterati has decided, is part of an ongoing Russian plot to rid the world of another of its enemies through murder.

Western media conspiracy theorism begins: “His death comes just days after he was accused of being a spy in a tweet by the Russian Foreign Ministry.” James Le Mesurier was a long-time British intelligence asset & involved in NATO interventions fm #Kosovo to #Syria. #WhiteHelmets

140 people are talking about this

And so the strange phenomenon of Twitter reinforcement begins. Any dissenting voices are simply drowned out making a real objective understanding of what is going on totally impossible.

That is the peril of relying on Twitter, an unfiltered conduit between self-appointed guardians of the universe and the outright mad, as a primary news source.

Despite the fact that the one source they are all using to back their wild accusations – Twitter comments from the BBC – has now been deleted, the influence it holds lives on and gathers pace.

This is how it happens, time and time again.

So while Twitter burns, like a Californian hillside, with rage at this potentially tragic accident, take a minute to consider who the victim is.

James Le Mesurier was a former British army officer (maybe intelligence services) and had been working as a military contractor – we used to call them mercenaries – in some pretty dodgy places for many years.

While the liberals laud the work of the White Helmets, there is another view, a view that is held by former US marine and US weapons inspector Scott Ritter.

ALSO ON RT.COMWhite Helmets co-founder & ex-British officer Le Mesurier found dead in IstanbulHe wrote in 2016: “The White Helmets’ function as an effective propaganda arm of the anti-Assad movement… with their training, equipment and logistical sustainment underwritten exclusively by donations from Western governments (primarily the US and UK), the White Helmets serve as a virtual echo chamber for American and British politicians and officials.”

So it seems the White Helmets are not the rescue angels some would have us believe.

One thing we do know is that through his work and his shadowy connections Le Mesurier is a man who certainly knew a lot. Maybe about Russia, but also about the UK, about the US and about Western involvement in the battle of Syria. And maybe that knowledge led to his death.

Or maybe, more prosaically, he simply fell from his apartment balcony in a moment of disorientation in the middle of the night.

The statements, views and opinions expressed in this column are solely those of the author and do not necessarily represent those of RT.